Experience heating as it should be.

Looking to install underfloor heating in your home?

UFH is cost-effective and simple to install as part of a new build project, fitting neatly into the build schedule.

UFH installation comes in at a similar price to installing new traditional radiator systems. This means those building new properties can benefit from a far superior heating system without paying extra.

As a low-temperature heating system, UFH is incredibly efficient in the well-insulated environment of a new build, using little energy, and is also perfectly suited to renewable heat sources, like heat pumps.

It’s simple to install warm water UFH in a renovation project with LoPro®. All systems in the range are simply laid on top of an existing floor, are low profile with as little as 15mm height build-up, and offer the highest heat outputs on the market.

UFH can be easily installed in a range of extension and conversion projects. Our team of specialist can work with you to add UFH into any new or ongoing project, whether it's a conservatory extension or loft conversion. They will include this in the design and planning of your project as well as factoring it into a cost estimate. 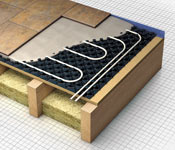 Underfloor heating for every home

Whether you are looking to include UFH in all or part of your home, we will design your system to keep every room at just the right temperature. With a wide range of tried and tested UFH systems to choose from, you can be confident that we have the right solution for your property.

Our team of experienced UFH heating engineers are adept at finding heating solutions suited to a range of lifestyles and situations.

Whether you're searching for plumbers/electricians to help install the best quality underfloor heating system in your Cheshire new-build, or you are adding an extension to your home and simply want to know how much UFH costs to add into a conservatory, we can help. At First Choice Extensions, we are proud to provide the highest standard of product and service when it comes to home renovations and builds. We have served the Cheshire and Greater Manchester regions of the North West for several years, including with our UFH installation services.

Our services include the following areas:

The two are similar, as they have the same effect. However, they both have their pros and cons.

Electric UFH is generally more expensive than wet underfloor heating systems. However, it is also much cheaper and faster to install. Because of this, dry systems tend to be opted for in smaller areas, where builders are on a budget.

Hydronic UFH, on the other hand, is more costly to install initially, but in the long-run will save homeowners a significant amount of money.

Generally speaking, UFH wet floor screeds are thought to be more efficient and of a more high standard than electric screeds.

What type of underfloor heating system is the best?

Screeded wet underfloor heating systems are the most popular types of UFH, and are generally considered to be the best quality. Liquid screed UFH refers to a 'hyrdonic system' -- one which uses water to heat it rather than electricity.

Another benefit of using hydronic UFH systems is that they can be easily coupled with renewable heating methods. This includes solar thermal energy and heat source pumps.

Hydronic underfloor heating can be coupled with renewable heating sources such as solar thermal and air source heat pumps.

From start to finish the service from First Choice Extensions has been excellent and really professional. We had a dormer loft conversion done in what was a smaller size loft. They helped us with drawings to maximise space and created a stunning spacious loft area with an en-suite bathroom. Any snags were quickly quickly rectified with no fuss. The build itself was made significantly less intrusive by the creative way they accessed the loft space via scaffolding for the majority of the works. We have no hesitation in recommending them.

I would recommend First Choice Extensions. We had, what turned out to be, a complicated renovation of our 1899 semi-detached house. The project was to create a utility room off the hallway into a reception room and to take out and replace the kitchen. We also had a new cylinder based boiler/heating system installed. The kitchen involved the removal of a chimney breast, the removal of the existing door and window and replaced with a bi-folding door. We also ended up having the floor taken out and replaced to ensure it was at the same level as the rest of the house. Underfloor heating was installed, new kitchen units from AS Kitchens and a feature brick slip wall. First Choice were able to meet all of the requirements and challenges discovered on the way. When we get around to it, we are hoping to use First Choice again for our loft conversion.

We have been delighted with the work from First Choice Extensions. There has been excellent communication and the team has cultivated a level of trust over the project that put us at ease. We particularly liked the transparency in the planning stage, where Tony gave us plenty of time to understand our designs and over the following weeks he was very patient, answering all our questions until we felt comfortable to commit. We didn’t feel rushed or pressured at any stage. During work the whole team was friendly and professional, they were also understanding of our son’s sensory needs and were thoughtful in letting us know when particularly noisy things were about to happen. They even brought him a pair of ear defenders which was a very nice touch. The work has been to a high standard and the team have been focused on making sure the final finish is excellent and that we are happy. When small issues have cropped up they have reassured us that everything will get sorted and they have delivered on that promise completely. We are grateful for the attention to detail and customer focus and we are really happy with our new family space. We would not hesitate to recommend them.

We chose First Choice as wanted our extension managed by just the one contact rather than us having to source lots of suppliers - it was important to us to have someone project manage the whole thing - both having busy jobs and working full time we didn’t have the time to arrange all the different elements that comes with having an extension. FCE provided lots of advice at quote stage and was prompt with the turnaround of quote and always on the other end of the phone before and all throughout the works taking place. We were happy with the price and knew we were in good hands. We now have the large kitchen and dining area we always wanted and are thrilled with the outcome; we love it! Thank you, First Choice Extensions.

Our build was finished on time (would had been early if it were not for Corona virus!), Very polite staff and nothing was a problem! I would highly recommend FCE and the team to anyone.

When we knew we wanted to have the work done (extension on the back of the house to open-up a larger Kitchen Diner), we did not really know where to start. We gave Tony a call on our friend’s recommendation, and I am glad we did! From start to finish, Tony and his team were brilliant. It is pretty daunting having building work done but First Choice Extensions made sure it was a smooth as it could be. Communication was first class; completions were on time and if there were ever any issues, they were always quick to respond and rectify. Using First Choice Extensions network, we were able to pretty much kit out the entire build and the team were always accommodating with other trades when on site. The attention to detail on finish is second to none! When it comes to after sales service, I have been blown away. Tony always picks up the phone, and no matter how big or small the issue, will be over to take a look. I can’t recommend these guys enough!

Further to my five star review of First Choice Extensions I would like to say how delighted we are with our new home. It has the real wow factor we were hoping for and we are so pleased we chose First Choice Extensions for our project. The renovation was delivered on time and within budget. The FCE team was very transparent with both costs and timescales and his communication was excellent. He was always at the end of the phone if we had a query and always came up with a solution for any problems we encountered.

We needed a single storey extension and were recommended First Choice Extensions by friends. They helped us with ideas prior to planning and the price was reasonable. The workforce were friendly, honest and easy to have around. We would certainly be happy to recommend the FCE team.

Excellent work done by First Choice Extensions and the team. We ended up going for a loft conversion and an amazing job was done. Highly recommend FCE for their professionalism and help throughout the process.

As First Choice Extensions were very competitively priced and recommended by friends, I used them to do a loft conversion and re-modelling the downstairs of my bungalow. All works were completed to a high standard and on schedule. I would definitely recommend them.

Great service. I would highly recommend them and all ready have. First Choice are easy to contact and to talk to, friendly, extremely helpful, clean, tidy and efficient. Great service competitive cost.

One Word, Fantastic. Always there on time, work perfect, reliable. All the guys are friendly and helpful, pricing is competitive. Would definitely recommend them.

Really great service, price and workmanship. A pleasure to deal with.

So pleased we used them twice! First Choice Extensions designed and constructed our loft conversion and subsequently our kitchen extension. They were on time, on budget and we we're delighted with their work on both projects. FCE were responsive, personable and trustworthy.

Garden wall and gate. Came at short notice when I was let down by a 3rd party. Can’t recommend more highly.